Lenovo has a series of desktop computers, which consist of several different customizable models. They range from the 700 to the 300 Series with many options and choices in between. The 700 is a very powerful gaming laptop and the 300 a low-end multi-purpose desktop. They even throw in a few nice all-in-one desktops just to even out the choices. Each of the different series have specific and perfected purposes, so you should have no problem picking which one is perfect for your home or business. Lenovo usually gives us deals on the home desktops, so if we do not currently have any, check back soon.

No matter what you are looking for, whether an effortlessly information and media storing hub or an entertainment lover’s dream, Lenovo has a desktop computer for you. No matter if you are looking for a high end all-in-one or a gamers high powered Legion desktop PC, Lenovo has a match for you. If you are looking to save money on one of these machines, check below to see if there are any deals going on to help keep some money in your wallet for your purchase. Free shipping is usually included as an added bonus.

Here are the Current Lenovo Desktop Coupon Codes and Discounts

Save 5% off any Lenovo Desktop with Coupon Code: EXTRA5

Compare the deals for the IdeaCentre AIO 5 series desktop with up to the 12th Gen Intel Core i7 processor, 16GB memory, Intel HD graphics and a 1TB hard drive, Deals Start at $849.99!

Shop the IdeaCentre AIO 3i desktop with up to the 12th Gen Intel Core i5 processor, 16GB memory, Intel HD graphics and a 1TB hard drive, Deals Start at $599.99!

Shop the IdeaCentre 5i tower desktop with up to the 12th Gen Intel Core i7 processor, 16GB memory, NVIDIA GeForce graphics and a 512GB SSD, Deals Start at $449.99! 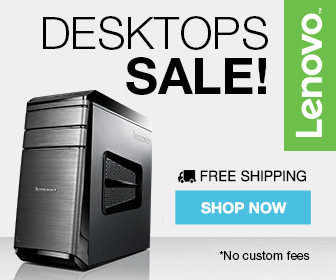 Some of the popular IdeaCentre Desktops:

Review of the IdeaCentre Desktop Models and Specifications

The IdeaCentre 700 takes your gaming experience to a whole new level. These desktops are easily upgradeable to accommodate for the newest games and gaming hardware available. Although with these specs, you shouldn’t have to upgrade for years. This model can be packed with up to the Intel© Core™ i7 quad-core processor, 32GB of memory, 8GB NVIDIA GeForce 1080 graphics and a 2 Terabyte hard drive with 256GB SSD.

The IdeaCentre 520 is just a notch down from the 700 series. It still has powerful discrete graphics and ample storage and memory to handle the most daunting of computing tasks. There is also a 24” and 27” all-in-one model available.

The lower end models like the 510s, 300 and 200 are perfect for the average computer user that does not need extreme computing power or powerful graphics for gaming.